Did Mozart's Piano Have a Pedal-Board? 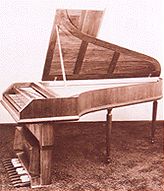 Mozart was not only a composer, but was also a popular pianist of the first order. One of his favorite pianos that he played while he was living in Vienna had a pedal-board that was operated with the feet, like that of an organ.

Today, the piano that Mozart owned is on display at Mozart House in Salzburg, but it has no pedal-board. However, the notion that Mozart had a piano with a pedal-board came from a letter written by his father, Leopold, who visited his son while he lived in Vienna.

Among Mozart's piano works, none are written with a part for a pedal-board. However, according to Leopold's report, at the first performance of the timeless masterpiece, Piano Concerto No. 20 in D Minor (K. 466), Mozart, who was the soloist and conductor, is said to have used his own piano, which was equipped with a pedal-board. One can perhaps imagine that the pedal-board was used to reinforce the left-hand part, but because Mozart was also an expert on the organ, operating a pedal-board with his feet was likely no different than using his hands.